A smart city is a technologically modern urban area that uses different types of electronic methods, voice activation methods and sensors to collect specific data. The success of a smart city relies on the relationship between the public and private sectors as much of the work to create and maintain a data-driven environment falls outside the local government remit. For example, smart surveillance cameras may need input and technology from several companies. Aside from the technology used by a smart city, there is also the need for data analysts to assess the information provided by the smart city systems so that any problems can be addressed and improvements found.

In his February 2021 state of the nation address, president Cyril Ramaphosa announced that several new post-apartheid cities are being conceptualized across the country. However, there have been a number of questions raised around what a ‘smart city’ actually means for South Africa.

From London and Singapore to Seat Pleasant, Maryland, they vary widely. Most share some common characteristics. Every city wants to be smart about being a great place to live. So, many embraces broad initiatives for connecting their citizens to the latest 5G and fiber optic networks, expanding digital literacy and services. Many smart cities get started with traffic control. London uses digital signs to post speed limits that change to optimize traffic flow. It also uses license-plate recognition to charge tolls for entering a low-emission zone in the city center. Cities in Belgium and France are considering similar systems.

There are initiations in which other metropolitan cities in the country are making advancements. The aim of Lanseria smart city development is to create the first post-apartheid city in South Africa based on ‘best practice’ in urban sustainability and the principles underpinning the smart city. The Durban Aerotropolis aims to become a premier business and trade hub in Sub-Saharan Africa. The plan will turn the entire surface area around King Shaka International Airport into a smart city with diversified economic activities that will boost the province’s economy. The city will cover 2,000 hectares of land as well as 10,000 hectares of green space for expansion. The development is also expected to create over 750,000 jobs.

Smart cities use a variety of software, user interfaces and communication networks alongside the Internet of Things (IoT) to deliver connected solutions for the public. Of these, the IoT is the most important. The IoT is a network of connected devices that communicate and exchange data. This can include anything from vehicles to home appliances and on-street sensors. Data collected from these devices is stored in the cloud or on servers to allow for improvements to be made to both public and private sector efficiencies and deliver economic benefits and improvements to the lives of citizens.

Nowadays, the 3D texture building model plays a big role in a variety of application domains such as game development, urban planning, Smart Cities, indoor/outdoor pedestrian navigation, environmental simulations, real estate, cultural heritage, facility management, and much more. One of the main advantages of 3D models over 2D is that it gives a better impression and understanding of the area to the users, especially when the model comes with textures.

Over the past 20 years, GIS has become a sophisticated system for maintaining and analyzing spatial and thematic information on spatial objects. From paper maps to digital cartography, GIS has always been dynamic and in evolution. In the early 90’s, the introduction of 2.5D concept enabled GIS to take on other dimensions and enabled users to get closer to the real world. The continuous improvements in GIS are allowing us to visualize the world in a true 3D environment. GIS is no longer 2D, but is now becoming 3D. 3D City Models are digital representations of the Earth’s surface and related objects belonging to urban areas. The most common use of 3D geovisualisation today is within public planning, architecture, environmental monitoring and landscape planning. For instance, museums focus on 3D information for presentations, using its unique ability for landscape visualisation and for visualising temporal changes. Tourism plays an increasing role, while the gaming industry keeps geovisualisation under surveillance.

In the past, Esri’s CityEngine was mostly used as a 2D to 3D modeling tool, but its latest release demonstrates its potential for becoming a specialized tool for urban design and as a 3D data import/export tool to enable new immersive computing experiences. CityEngine is Esri’s 3D desktop modeling software for detailed large-scale 3D city models. It is used for urban design, site planning, master planning, as well as a tool for delivering VR/AR experiences to planning and GIS professionals. ArcGIS CityEngine is an advanced 3D modeling software for creating huge, interactive, and immersive urban environments in less time than traditional modeling techniques. The cities you create using CityEngine can be based on real-world GIS data or showcase a fictional city of the past, present, or future. 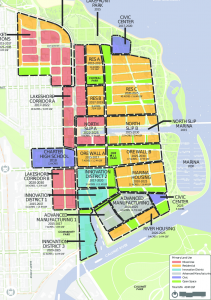 Today, the 600-acre site is in the master planning stage. Called “The Chicago Lakeside Development”, it was conceived by developers McCaffery Interests and aims to revitalize Chicago’s south side by bringing new services, jobs, and residences to a dilapidated, unserved area in the third largest city in the United States of America. The largest impacts to the immediate neighborhood will be an influx of service and construction jobs, as well as bringing grocery stores to an area where food stores are very limited. The program calls for the construction of 13,500 residential units accommodated by single family dwellings and multifamily mid- and high-rise units. It also envisions the development of 17,500,000 SF of retail space and the construction of nearly 125 acre of public park space and bike paths, along with a 1,500-slip boat marina. This will not only promote a green urban environment, extending the public park land found along Lake Michigan throughout Chicago, but will also restore the natural beauty of the site. With a build-out of approximately 30 years, the total cost of the project is estimated to be $4 Billion. With an emphasis on integrating scientific and engineering models into platforms used by industry, the project selected CityEngine, from Environmental Systems Research Institute (ESRI), as the “dashboard” through which the urban designer interacts with the city designs. Computational models can be invoked to analyze changes with respect to energy demand over time.

The future goal of this map is to create an interconnected virtual city where changes to plans can be analyzed in real time instead of weeks.  Planners can refine and monitor development progress as individual buildings aggregate into zones, and zones etch out residential and commercial borders.

About the Author: Michael Mutekeri

My interest is on Data Science: Artificial Intelligence, Machine Learning, Deep learning. Continuously looking for ways to explore the tools in the field and use them to improve any industry